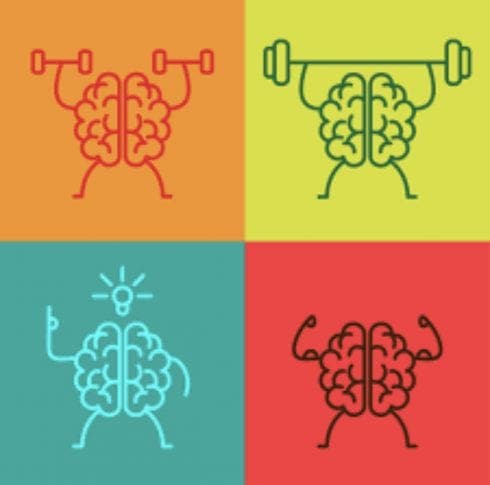 It has long been believed by mental health professionals that there is a strong link between poor mental health and poor physical health. Stress is linked to a large majority of illnesses presented at GP’s surgeries. For example, someone might present to their Doctor with symptoms of aches and pains that generally cannot be explained away through medical testing, but can be traced to a person being under stress.

If we were to look closer we might find it is actually stress that is the root cause of a lot more physical ill health than we imagine. Stress can be caused by a combination of, ‘a network of traumas; negative beliefs, thoughts, and emotions; interpretative perceptions; and even “downloads” of family patterns of how to deal with stress’(consciouslifestylemag.com). Whilst a GP might prescribe medication for stress induced illnesses, it is very much a case of masking the issue rather than curing it.

So what physical illnesses might we associate with stress?

Below is an infographic showing the areas of the body which are affected by stress: 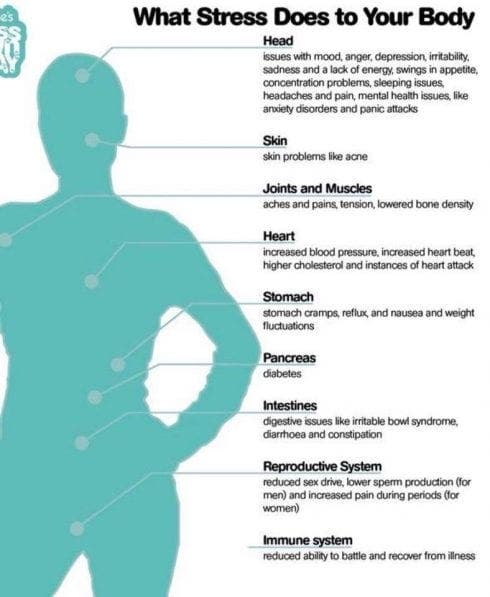 It would be fair to say that pretty much the entire body can be affected by stressful life situations.

Hannah Millington wrote about her chronic pain condition and how various medications and interventions could not ease her physical pain. She writes, ‘once you understand that the mind and body are not separate, it seems plausible that, if pain tells us when there is something wrong physically, it can tell us when there is something wrong mentally too‘ (theguardian.com). Whilst that might sound obvious and intellectually understandable, it is how we go about managing physical ailments through the reduction of stress levels.

Why are some people more vulnerable to psychosomatic symptoms of stress than others? (The term ‘psychosomatic’ derives from the Greek words (psyche) mind and (soma) body. Psychosomatic pain is when a persons mental stress makes them physically unwell). 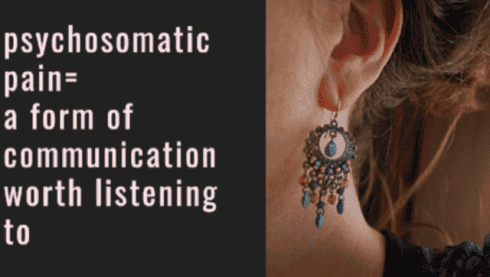 Studies undertaken have shown that particular psychological and personality traits are at greater risk for stress related physical conditions. Some vulnerable individuals, the studies suggest, learn to filter emotions and actions through physical pain. A combination of early lifetime and environmental and epigenetic factors appears to be evident (The Emotional Brain as a Predictor and Amplifier of Chronic Pain: E. Vachon Presseau et al 2016). In simple terms, someone who has had childhood trauma or trauma passed through genes (epigenetic) for example, could render them more vulnerable to psychosomatic symptoms.

So whilst it is widely believed and seemingly proven that some people feel emotional pain through physical ailments, how can these people ease their pain and deal with stress in a more healthy way? A Doctor called John Sarno has been credited with being an expert on psychosomatic pain and has written a book about how to overcome the condition. In his book, ‘The Mind/Body Prescription Sarno theorises that many conditions such as repetitive stress injury, migraines, neck and back pain are caused through repressed emotions. He believed that these conditions could all be cured without drugs or surgery. He created a treatment which he termed ‘Tension Myositis Syndrome (TMS)’ which is based on the dynamic of bringing repressed anger and rage to a conscious level. Sarno believed that repressed anger is so powerful that it inhibits the flow of oxygen into the bloodstream and thus creating pain (social-anxiety.com).

How would we know if our pain is caused physically or through stress related factors? First and most obviously would be the absence of any medical explanation for the symptoms experienced. If symptoms persist with no diagnosis forthcoming then it would be wise to talk it through with a therapist and try to discover the source of the pain.

A video about John Sarno’s ‘The Mind Body Prescription'.